Prior to reading this it would be worth reading the short history article about plate bending rolls as it takes us up the 1950’s.

The original power rolls were generally of the Pyramid Type (Figure 1). 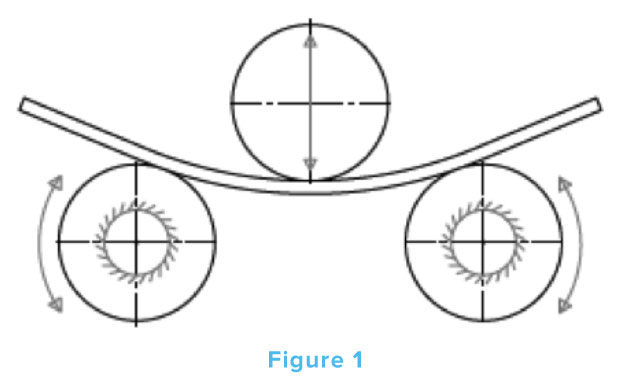 This design had the problem regarding the flat ends. The length of plate spanning from the point it touches the top roll to the point it touches the bottom roll is not bent.  The old plate bending operators did however come up with ways to deal with this problem and some of them are described in the ‘The Recent History of Design and Selection of Plate Bending Machines’ (Part 1)

The Engineering design problem being faced in the late 1950's was the need for very thick curved plate which was required for pressure vessels for use in the power and chemical industries, and the forces required resulted in the need for huge electric motors and gear boxes.

The introduction of hydraulics into the design of plate bending machines then became a necessity and a natural transition.  Hydraulic cylinders had been used in plate pressing in the 19th century and so the technology was already available in the marketplace. The advantage of hydraulics is that you can apply a huge force and have full control of the amount of this force by simply controlling the pressure in a hydraulic cylinder or ram, as it is sometimes called. It also had the advantage of being able to stop the bending instantly.

The use of roller bearings was introduced, and just the same as the introduction of hydraulics, they had previously been in use since the late 19th century when Henry Timken, who was a railway carriage maker from St Louis in the USA, patented the roller bearing in 1898. 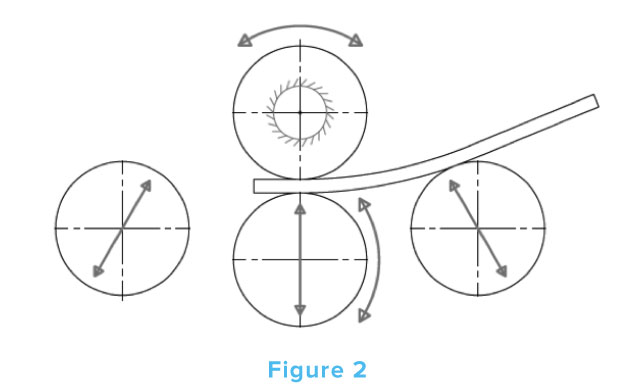 There was another change at about this same time; the frames of most plate bending machine rolls were made from iron castings which could be made very strong and substantial but were not good at taking impact or shock load. They were also difficult to repair satisfactorily if the frame cracks. It was therefore a natural progression to move into fabricated steel frames. This process was accelerated by the introduction of regulation regarding the pollution from iron foundries in Western Europe in the 1960's.

The average production foundry, with existing patterns, could sand cast a plate bending machine frame using two men in two days and so was a very economical way to produce the cast frame of the plate roll. They were however faced with having to install expensive extraction and filter equipment which made the process uneconomic to continue, so fabricated frames became the standard from the early 1960's.

All these changes added up to a big step forward for plate bending. The drive was still mechanical, using cardan shafts to transmit torque and rotation which cannot be linked up directly because of the movement of the two driven rolls.

The 4 roll double pinch plate bending machine design enabled the plate to be pre-bent in the rolls, and having the second outer roll it was possible to pre-bend both ends of the plate without the need to withdraw the plate and turn it around.

The development continued in the 1960’s with the use of hydraulic motors that gave you a high starting torque and also easier control of the rotation speed by changing the flow volume from the pump.  There were a number of ways this was done and the use of an axial piston pumps was one design where you simply  adjusted the angle of squash so the pump that could go from maximum volume per minute speed to zero/total stop in an instant.

Towards the end of the 1960’s, an alternative design was introduced which was the 3 Roll double pinch plate bending machine.  This arrangement used a planetary system of gears and the two bottom rolls pivoted on a swing arm mechanism. The top roll was in a fixed position as was the drive gear wheel to the two planetary gears.  It was then straight forward to install a chain drive to the top roll.  This driven gear was powered by a hydraulic motor with variable speed.

Similar to the 4-roll double pinch plate bending machine, this design also allowed pre-bending both ends without turning the plate.  3 roll drive and variable speed was another huge step forward and is the design that many medium size machines use today. This is shown if Figure 3. 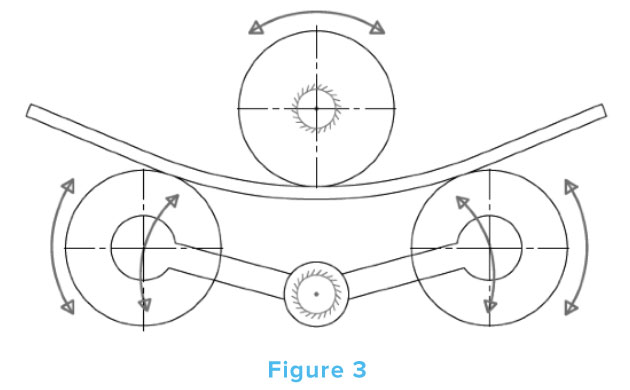 Over a period of 20 years, the design of plate bending machines had moved from an all-mechanical gearbox drive, usually using phosphor bronze bearings and cast iron frames with a pyramid design, to one using hydraulics cylinders with moving rolls held in position using roller bearings and driven by hydraulic motors with a variable speed.